Law enforcement agencies in Kitsap County are holding an event this Sunday to reach out to minority groups in the community.

Kitsap County Sheriff Gary Simpson and Bremerton Police Chief Steve Strachan are joining together with local city and county church leadership to host a “community outreach unity picnic” with the theme, “Let’s Be True to the Black and Blue,” according to a press release.

“This endeavor is part of a coalition action group to bridge gaps and miscommunications between law enforcement and the diverse communities whom we all serve,” the release states. “Whether private citizen, active serving law enforcement or retired, volunteer or full-time … everyone is welcome to join in as our guests and be part of this community venture!”

The picnic is open to the public and takes place from 3-5 p.m. Sunday, Aug. 21 at Evergreen Rotary Park, 1500 Park Avenue in Bremerton.

The Washington State Department of Health this week confirmed the first death from West Nile virus in the state so far this year.

A Benton County woman in her 70s died of the virus, and was most likely exposed to the virus from infected mosquitos, according to a press release from the Department of Health (DOH). Benton County is in eastern Washington and contains the city of Richland. Washington State Public Health Laboratories ran tests to specifically identify West Nile virus as the cause of her illness, the release states.

A Benton County man in his 80s is currently hospitalized with the virus, and was also likely exposed to infected mosquitoes in Benton County, according to the release.

So far this year, West Nile virus has been found in seven counties in eastern Washington, the release states. The region continues to be a “hot spot” for the virus in Washington due to the combination of warm weather, standing water and vegetation providing ideal habitat for mosquitoes and birds carrying the virus.

A man died in a motorcycle crash near Port Orchard on Tuesday.

The complaint alleges that port officials violated RCW 42.17A.555 by using public funds and facilities to litigate against two ballot propositions promoted by the group

A 16-year-old girl died last night after falling off a ladder at a local construction site in Silverdale early Saturday.

The Pierce County medical examiner identified the victim as Emily J. Ramm, 16. She was pronounced dead Saturday evening at Tacoma General Hospital. The determination as to the cause and manner of death is reportedly still pending.

Press releases from the Kitsap County Sheriff’s Office give the following account of what happened:

The sheriff’s office was notified of the accident

The ad pierces your consciousness and catches you by surprise. Plastered on the side of Seattle’s King County Metro it hurls you momentarily back in time, to a time when nuclear weapons were an imminent threat to our survival. Or did the era never end?

A Snohomish County Superior Court Judge ruled today that Tim Eyman has violated a court order to requiring him to disclose documents in a campaign finance probe.

Judge Ellen J. Fair today ordered granted a request from Attorney General Bob Ferguson, ruling that Eyman and his political committees violated a June 29 court order by failing to meet the court’s deadline for disclosing documents in Ferguson’s campaign finance probe, according to a press release from Ferguson.

The court granted Ferguson’s request to seek the relevant documents directly from the federal government, as well as 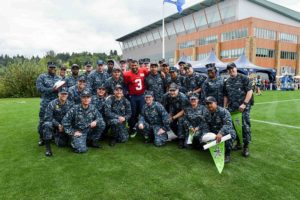 Russell Wilson, Seattle Seahawks quarterback, poses for a group photo with Naval Base Kitsap Sailors after team training during the Seahawks