That trip and her mother’s journey with Alzheimer’s are the subject of Jagger’s new book, Everything Left to Remember, which is being released Aug. 26 from Flatiron Press. She’ll be celebrating the release of the book Aug. 28 at Bainbridge’s Eagle Harbor Book Co.

Jagger says she frequently journals to help her understand herself and the things that are happening in her life. That process was the basis of her new book.

“When my mom and I were flying from Bozeman to Vancouver, Canada, at the end of the trip, she was sitting in the seat next to me and I found myself furiously taking notes in the notes app on my iPhone about various different things that had happened in the trip,” Jagger recalls. “It happened really quickly when I was on that plane ride, and started to realize the volume of stuff that was coming out of me, quickly onto the app on my iPhone. And I thought, there’s something bigger here. I wouldn’t have this volume coming forth so quickly if there wasn’t something larger that wanted to be communicated or understood.”

Although it has been difficult watching the progression of her mother’s Alzheimer’s disease, Jagger says the experience has also left her in awe. 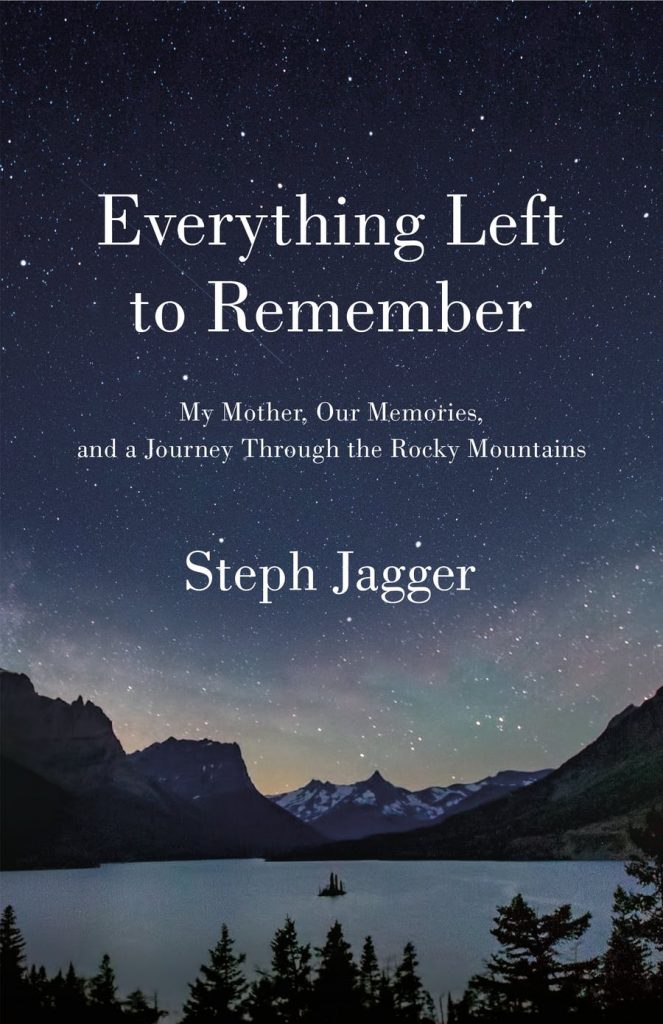 She invoked a quote from Seattle singer-songwriter Brandi Carlile: “There is nothing more real or more practical in this universe than mysticism … and it’s usually sitting right smack in the middle of grief.”

“I think that’s an interesting doorway in,” Jagger says. “If I am willing to not distance myself from grief — which, again, I think is part of our mental health process — if I am willing to walk into it and befriend it and be curious about it, and allow myself to have those feelings of, say, sadness, rage, sorrow, all of those things that come with grief, then I might also be able to witness other things, like awe and curiosity, connection, and other things on the other range of those emotions.”

Jagger says a person with Alzheimer’s is “living inside of a shifting time-space reality.”

That fluidity can result in interesting — even beautiful — moments, Jagger says.

“My mom had me when she was 37 years old, which means I didn’t know her when she was 0 to 37,” she says. “But because of the shifting time-space reality, sometimes she thinks she’s a 16-year-old, and I get to witness her doing things and acting in a certain way that’s like a glimpse into who she would have been at that age. And that is a phenomenal gift, when you think, ‘Oh, I wish I knew who my mother was at 16.’ Well, there you are. There’s a picture of who she was at 16 years old. So I think there’s some real gifts in there.”

Jagger will read from the book at the Aug. 28 event at Eagle Harbor Book Co. The event also includes a Q&A.

She’ll talk about her mother’s Alzheimer’s, but also tie the book’s themes to larger issues, she says. In the wake of COVID-19, we’ve all seen systems we thought would keep us safe — such as capitalism, corporate systems, or communities — be tested under the stress of the pandemic.

“I think we’re seeing a lot of those shift and change and some of them crumble and collapse,” she says. “And I think there’s a really large thread in the book that is the question of who will hold us, and where can we go to seek that safety and comfort when those things go?”

She’s also looking forward to meeting with people in her community after putting off in-person events for so long because of COVID, she says.

“We haven’t had an opportunity to do a lot of in-person events, so I’m hoping it’s going to feel a bit more intimate than some of the other cities and places that I’ll go, because these are people that I share a backyard with,” she says.

Purchase Unbound and Everything Left to Remember. (Affiliate links — Kitsap Scene may receive a commission if you make a purchase through these links, at no additional cost to you).

Help Kitsap Scene continue to cover local events like this by subscribing to Kitsap Scene+ for $4.99/month and getting access to exclusive content and other perks. Try it free for 14 days.

In 2013, Tamara Kaye Sellman sat down to study for her finals test for the sleep technology school she…

“Be like a child and become lightning. Like this!” And with that instruction, author Sherman Alexie had a sizable…