Pokemon Go: The Game That Makes You Look Like a Creep When You’re Actually Just a Nerd

Come on, kids! Put on a hat, slather on some sunscreen and slip into some comfy shoes. We’ve got a videogame to play!

Pokemon Go was released on July 6, and my Facebook newsfeed has been blowing up with poke-this and poke-that ever since. The augmented-reality game is getting couch potatoes to leave their homes and head off on their very own pokemon journeys.

Although portable gaming systems like the Nintedo DS, or even smartphone games, can be played anywhere, they’re still typically played with one’s head bowed down to the screen, leaving the player oblivious to their surroundings. 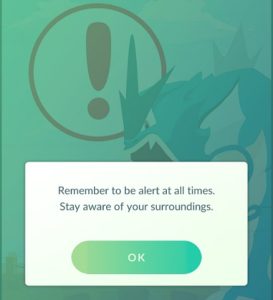 Pokemon Go requires you to head off into the “real world” to search for pokemon, collect free items at spots known as “PokeStops,” and to pit your pokemon against another trainer’s pokemon at gyms.

That sounds promising on paper, but you’re still going out and viewing the world through the lens of your cameraphone. Pokemon Go addresses this danger immediately by warning players to, “Remember to be alert at all times. Stay aware of your surroundings.”

You’re then introduced to Professor Willow. I’m not sure if this is a character who has appeared in later Pokemon games — I’ve only played the original blue, red and yellow Gameboy editions of the game — but he looks like a backpacking Professor Oak going through a mid-life crisis. 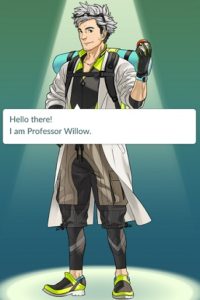 Nevertheless, Willow performs essentially the same function as Professor Oak, helping the player get started and explaining how the game works.

Before you can start playing, though, you have to pick out an avatar. You can pick a male or female character, and customize some aspects of its appearance, such as hair and eye color, or the color scheme for its shirt, pants, shoes and backpack. The differences are minute, and it seems rather pointless to allow players to make such minor customizations.

Once you’ve established your avatar, the game surrounds you by three pokemon that will be familiar to anyone who ever played the original Gameboy game: Squirtle, charmander and bulbasaur. I chose to go after charmander.

You don’t battle pokemon to catch them in Pokemon Go; you simply flick pokeballs at them, and have to do so with the right aim and pressure to catch one. You do this by sliding your finger across your phone’s screen. It’s surprisingly fun, flicking these little digitally-animated pokeballs at on-screen pokemon.

At first, I found it difficult to aim; my pokeballs would usually veer right or left of my target, and occasionally fall short or soar over its head. Adding to the difficulty, the pokemon will occasionally hop or back away, dodging one’s throws.

As time went on, however, I found it easier to hit my targets — although they occasionally escaped their pokeball prisons, just like in the original games, and I’d have to try to capture them again.

Once you catch your first pokemon, you pick out a name and Willow tells you to look out for PokeStops. These are real-world locations where you can pick up free items, such as pokeballs and potions.

You have to move through the real world to move your character on the on-screen map. The roads on the digital map appear to be generated based on real-world maps. Tellingly, if your Internet connection or GPS give out, the roads disappear — if the game doesn’t stop working altogether, that is.

As you move through the world, pokemon will randomly pop up beside you, and you can attempt to catch them. You can choose to either see the pokemon through your phone’s camera, which makes it look like they’re right there with you, or with an animated backdrop.

I was running some errands in Gig Harbor when I first tested the game out. I clicked on a PokeStop that looked fairly close by, but the game informed me it was too far away. After trying to get closer and clicking on it again, it told me where the stop was: The Cushman Trail Park. My GPS told me it would take 35 minutes to walk there, so I got back in my car and drove to the trail. Once there, I spun the PokeStop icon, which generated several pokeballs and an egg.

I also encountered several pokemon at the trail, including a zubat, an eevee and a bellsprout. I have to admit, I felt like a creep waving my phone around, trying to keep pokemon in my sights. There were times when my phone was pointed directly at someone walking the trail, and I can only imagine it looked like I was trying not-so-discreetly to videotape them.

At least some people are in the know; later, while pumping gas, I was trying to catch a particularly stubborn zubat. A guy walking into the convenience store glanced my way and said without stopping, “Trying to catch a pokemon?”

As you catch pokemon, you gain experience points and can gain levels. You need to be at level 5 before you can participate in gym battles.

After reaching level 5, the game has you select one of three teams: Team Instinct, Team Mystic or Team Valor. I chose Team Valor, because I don’t really understand what the difference between the three are, and I liked the sound of it.

I ended up stopping at a gym in Belfair, located at Ace of Spades MX Outlet. There, I battled a character going by the awesome handle of “pokemom420” and her CP104 bellsprout, going against my CP120 Pidgeotto.

I haven’t quite figured out how battling works, and as a result, I lost all three of my battles against pokemom420. I was half expecting Professor Willow to pop up before the battle and explain how it worked, but that didn’t happen. I guess you’re supposed to just figure it out, illustrating that the game could do a better job of explaining some aspects of the gameplay.

There also appear to be many bugs that still need to be worked out. During my three days of playing Pokemon Go, the game froze, stalled and crashed more times than I can count. I’m not sure whether it’s due to software problems or overloaded servers resulting from the overwhelming reception from Pokemon fans, but I hope these issues are resolved soon, as they adversely affect the experience.

If these same people were slumped over slot machines at a casino rather than perched over their smartphones, we’d call them gambling addicts, not casual gamers.

The game also seemed to tax my phone’s resources to a degree. I downloaded the game onto my somewhat dated, but nevertheless high-end Samsung Galaxy S5. While the lag issues I experienced were fairly minor, I couldn’t imagine playing this game on a low-end phone with a crappy processor — it would be unplayable.

As enjoyable as Pokemon Go is, it’s troubling that the game has taken the Pokemon franchise into the world of in-app purchases. While the game is free to download onto your Android device or iPhone, you’re encouraged to purchase items like pokeballs and potions. It’s admirable that the game is designed such that there’s ample opportunities to receive free items. But the nature of these “freemium games” is such that people are compelled to spend real money to compete in the virtual world. When you start encountering people who have spent hundreds of dollars to level up their pokemon, it’s easy to see how you could be tempted to spend your own money to compete.” alt=”” aria-hidden=”true” />

According to a survey from February 2014, just 0.15 percent of all mobile gamers accounted for 50 percent of monthly in-game purchases. While some of those might be people who have lots of disposable income to burn, I’m sure some are people who shouldn’t be spending their limited income on videogames. If these same people were slumped over slot machines at a casino rather than perched over their smartphones, we’d call them gambling addicts, not casual gamers. Why should Pokemon Go get a free pass for contributing to this problem?

It may be that Pokemon Go is striving to strike the right balance between offering free items and paid upgrades, but it’s a shame they couldn’t have offered the game for a low, one-time fee instead.

Still, it’s an engaging game notable for the innovative way it’s getting people to leave their home’s media rooms and venture into the real world. It’s too soon to tell whether that’s ultimately a good or bad thing; for every story of people coming together to catch pokemon, there’s a story of Pokemon Go players getting hurt, getting robbed, or discovering bodies.

But one thing is for sure: The world will never quite be the same now that it’s full of pokemon.